Me and The Boys of Baseball History

While recently watching a Dodger game on TV, a friend inquired: “What’s this - another attempt at trying to become butch?” I was highly insulted. Although I may not enjoy playing baseball, truth be told I’m terrible at it; I actually really enjoy watching the game.

As a teenager I basically grew up in a ballpark. My family had season tickets to Shea Stadium, home of the New York Mets. From age 13 to 18, I attended every home game the Mets played. My older sister, Jacqueline, was a huge fan and got me hooked as well. She was madly in love with outfielder Lee Mazzilli, while I had my eye on second baseman Wally Backman, who possessed the best buns in all of baseball. (Backman’s bubble butt aside, I really did enjoy the sport though, honestly!)

As season ticket holders, we were fortunate enough to secure two highly coveted tickets to Game 6 of the 1986 World Series. My parents made the ultimate sacrifice and let me and my sister attend the game, but we never imagined we would witness history being made that October evening.

With the Red Sox leading the series three games to two, Game 6 was crucial. At the bottom of the 9th inning, the score was tied at 3 forcing the game into overtime. During the top of the 10th, the Red Sox pulled ahead and took the lead, 5-3. But the Mets were not about to go down easily, and rallied in the bottom of the 10th to miraculously tie the game 5-5. With Ray Knight on third base representing the winning run, Mookie Wilson stepped up to bat. Shea Stadium was literally rocking as Mookie, with a full count, faced another pitch and hit a slow infielder grounder up the first base line. It looked like an easy out and the end of the inning, but Red Sox first baseman Bill Buckner misjudged the ball. As the ball rolled under Buckner’s glove, Ray Knight jubilantly crossed home plate and scored the game winning run.

Fans erupted in joyous mayhem as the Mets pulled off a miracle. Like most in the stadium that evening, my sister and I experienced a surge of elation knowing we just witnessed one of the greatest games in baseball history. Two days later, we watched the final game of the series from our living room sofa as the Mets won and claimed the title of World Series Champs.

New York City hosted a ticker-tape parade the next day to celebrate the Mets victory. After hours of pleading with my parents, they actually agreed to let me cut school and attend the festivities. I was shocked yet thrilled; this was as miraculous as the Mets victory. 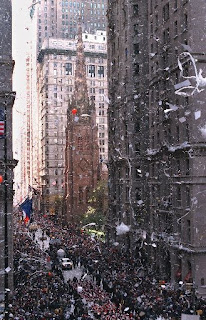 The next morning, my mother, sister and I boarded the M train from Queens for downtown Manhattan. We arrived to a delightful disaster as thousands of people crowded the narrow, congested streets of lower Manhattan. Police barricades lined the sidewalks in an attempt to contain the crowds, but served little purpose. As the procession of cars began heading north on Broadway, fans poured into the street for a closer look at their World Series Champs. My sister and I were right there amid the congratulatory chaos, snapping photos and calling out to our favorite players. Covered in white streamers and paper that endlessly cascaded down from every skyscraper above, we felt like we were in heaven.

Later that evening, back home in Queens, reality reared its ugly head. Tomorrow, I would have to return to school and face the wrath of Brother Roy, the Dean of Disciple. I told my mother I needed a note stating I was sick and explaining why I missed school, but she refused to lie. So my father wrote the note instead, which simply read: “Please excuse my son, Vincent James Arcuri II, from school yesterday as he had to escort his mother to a civic function.” Seriously?!?

When I arrived at school the next morning, an announcement was delivered that anyone who missed class yesterday was to report to the gymnasium. There, some 350 proud, teenage boys – all Mets fans, all still ecstatic from our team’s victory - assembled to face Brother Roy and detention. I felt an overwhelming sense of camaraderie and for once I was “one of the guys.” So I tossed that embarrassing note my father wrote, joined my fellow classmates and gladly served time for my team.
Posted by Vincent James Arcuri at 11:07 PM