Finally Fitting Into My Past

As young men dressed in oxford shirts and ties roamed the hallways, hormones and testosterone raged through their pubescent male bodies causing facial hair, deep manly voices and uncontrollable erections. That was life at Archbishop Molloy High School, an all boys’ private Catholic prep school in Queens, New York. Like most high school settings, those corridors were crammed with cliques – from jocks to stoners, preppies to rockers, and hipsters to geeks. Where did I fit in? I didn’t. 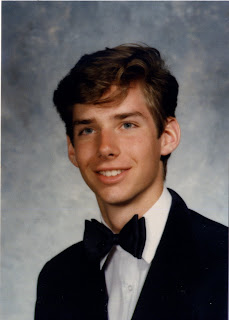 With my 80’s bouffant, perfectly parted to the side courtesy of a mound of mousse, paisley tie and Bass Weejuns, my fashion style was an amalgamation of The Preppy Handbook and Greenwich Village gay. No, I wasn’t out, but even completely closeted, it was still pretty obvious. As a result, I felt isolated, tormented both inside and out. If I wasn’t called a faggot behind my back, the question was raised rather rudely right to my face: “You’re not a fucking faggot are you?”

At Molloy, you could be smart or stupid, fat or skinny, popular or a geek, it didn’t matter, you’d still find your place; but the one thing you couldn’t be was gay. Out of a class of roughly 320 students, I had the distinct disability of being one of the rare few.

During my freshmen and sophomore years, I felt completely alone, an outsider, lost. I hated high school and dreaded each day as I entered that brick façade adorned with its gigantic cross that was supposed to represent comfort, yet offered little to no solace from the verbal taunts of faggot, fairy and fruitcake. All of which left a scar on both my pride and my self-confidence.

By junior year, I solidified a friendship with a guy who also happened to have the biggest muscles in the entire class. Okay, so maybe I did have a slight crush, but his friendship shielded me from the wisecracks which were now kept at bay or at least out of earshot. And although I now had my own circle of friends, there was still no one quite like me, until I met Sean.

While I roamed the halls with my head down, desperate to avoid conflict or confrontation, Sean, with his punk rocker hair and Buddy Holly glasses, held his head high with an air of confidence. I admired his bravado, but envied it at the same time. (How was he pulling this off?)

Together, we shared a secret kinship, an unspoken understanding, yet we kept our friendship at a distance. In fact, the only time we ever hung out was when we cut gym class together at Sean’s urging. (I usually forged a note from my father claiming I sprained my wrist and couldn’t participate.) But even then when it was just the two of us, our friendship remained strictly on the surface, never a mention of our silent bond.
That was almost 20 years ago; I hadn’t seen Sean since until he recently tracked me down through a networking website. Upon receiving his initial e-mail I was thrilled to discover he too now lived in Los Angeles. Through the years Sean had always remained in the back of my mind – wondering where he was and what became of him.

We e-mailed back and forth for several days, quickly relying on old habits, never mentioning or even broaching the subject of sexuality, yet once again we shared an unspoken knowledge. After a week of e-mails, we met for brunch. Our mutual anticipation and excitement was obvious as we greeted each other with a hug, both visibly elated to finally express ourselves. We spent the next three hours speaking openly of our lives and our loves. Sean even pulled out our senior yearbook and instantly we digressed to high school boys (okay, girls) pointing out all the cute guys and bonding over our mutual adoration for Chad Hamilton.

Grateful for our reconnection, we also shared regrets – wishing our friendship had flourished 20 years earlier. Sean revealed he also faced humiliation during freshman year, but his older brother quickly helped alleviate the situation and confessed that his so-called air of confidence was strictly an act. I wondered why we couldn’t have shared these insights and this connection back in high school.

We talked about it at length, but never concluded our conversation until a few days later when Sean e-mailed me with an apology. When I asked why he felt the need to do so, he confided that he was fascinated by me in high school, (his words, not mine) but needed to keep me at arms length. He was sorry we couldn’t have been friends, because God forbid we were, we would have once again been targeted as faggots and freaks and faced even further ridicule and humiliation. Sad, but true.
I responded candidly that I couldn’t care less about what happened in high school, an apology wasn’t necessary because I realized in reconnecting with Sean, I wasn’t alone. Knowing that he experienced all the same conflicts, issues and struggles that I had at Molloy, altered my entire perception. I did fit in – with Sean. Together, we went through the trenches and came out survivors, and now we could be true friends. And unlike the rest of our graduating class, we both still have full heads of hair, 30-inch waists, and are completely content – it’s good to be gay!
Posted by Vincent James Arcuri at 11:04 PM