You Light Up My Life 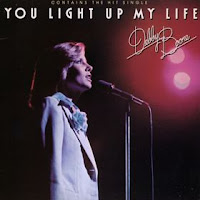 One of the first records I ever owned (yes, I know I’m dating myself) was Debbie Boone’s debut hit You Light Up My Life. (My first record was actually Glenn Campbell’s Rhinestone Cowboy - I know, for a kid from Queens, I had very eclectic taste in music.)

Anyway, yesterday Debbie Boone appeared on Oprah and sang her once ubiquitous smash hit single, which back in 1977, spent a then record ten weeks at number one on the Billboard charts. Well, as soon as Oprah started showing clips of Debbie from the 70’s, I had an immediate flashback to my childhood and the day my mother purchased that record for me.

One afternoon, after school, we crossed the street and stopped in Woolworth’s, and there in the front of the store, was a glass case with all the 45 records on display. I was only six or seven at the time, but I was old enough to read and promptly spotted a stack of You Light Up My Life records. I was so excited, I begged my mother to buy me one. I think back then a single only cost about 99 cents apiece, so mom was happy to oblige. As soon as we got home, I raced downstairs to our basement, plugged in our electric red plastic jukebox, carefully removed the record from its sleeve so as not to scratch it, and gently placed the disc on the turntable. Nervously I placed the needle on the edge of the record and instantly heard Debbie singing, “So many nights, I sit by my window…” Well, from that moment on, that song played over and over again for so many days and so many nights, with me singing along each time. God, I LOVED that song.

My older sisters actually liked the song at first as well, but then again, who didn’t? But in our house You Light Up My Life was heard day in and day out for weeks on end. If it wasn’t being heard on the radio or played on our jukebox, I was singing it at the top of my lungs. I knew ever word, note and dramatic pause. (But of course.) It eventually got so bad, my sisters banned me from singing the song and whenever we heard it on the radio, much to my disappointment, they immediately changed the station.

I actually forgot about the significance of You Light Up My Life in my own life until yesterday’s episode of Oprah. It truly was my first favorite song (sorry Glenn). And as the lyrics state, “It can’t be wrong, when it feels so right, cause you light up my life” - Debbie Boone and her hit single certainly lit up my childhood.
Posted by Vincent James Arcuri at 12:06 PM No comments: