A League Of My Own

In the suburbs of New York City, boys are raised with an edge, taught to be tough, to never shy away from a fight, to always act like a man. I, on the other hand, was nothing like that at all. While the other boys idolized athletes and action figures, I idolized pint-sized sitcom star Gary Coleman. While they played roller hockey, I reenacted scenes from Xanadu. And while they hung out perfecting their sporting abilities, I spent time with my mother practicing my crocheting skills. I didn’t partake in the same activities as the other boys in the neighborhood, but there was one exception I was forced to conform to—Little League.

By the time I was 6 years old, my father must have realized he needed to toughen me up. Since every other little boy in the neighborhood played Little League, he assumed I should too. One Saturday afternoon, while holding my father’s hand as we prepared to cross the street, I recognized the Little League office facade; instantly comprehending my fate, panic immediately set in. We had driven past the storefront numerous times, my parents always pointing it out to me and saying, “There’s the Little League office, maybe we should stop in there someday and sign you up. That would be fun, huh?”

But the McLaughlin brothers who lived across the street from us—and who were within two years of my age—both played Little League. So did the Fisher boys down the block, as well as the Gambino twins from around the corner. Everyone was doing it, so it was just natural that I should as well. They were boys; I was a boy—perfect!

But it felt far from perfect as I stood across the street from the office. As my eyes fixated on the door, I watched another father exit with his son, paperwork in hand, overjoyed that his little guy was finally going to play ball. I desperately tried to pull away from my father pleading, “No, I don’t want to, please don’t make me.” But Big Vince ignored my pleas as he held a vice-like grip on my dainty little hand and literally dragged me across the street straight into the Little League office. Within minutes, I was officially registered as one of the Giants, though I felt decidedly small. 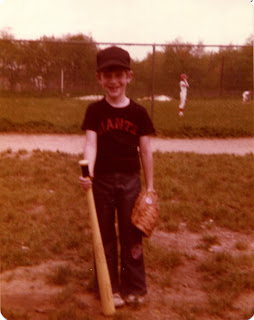 I had no clue how to play, was deathly afraid of the ball and had zero skills! I couldn’t catch, hit, throw or run. The bat was too big, the glove was too loose and the cup was way too small. (Just kidding.) But seriously, there I was suddenly thrown out on the field with balls being thrown and hit at me, while my own were tucked behind a little plastic cup stuffed inside my Fruit of the Looms. I was completely frightened and petrified.

The coach would constantly yell at me to “get under the ball and catch it.” Well, back then I was too afraid, I never got under any balls. (Today—well, that’s a whole different story.) I usually played centerfield and always prayed for no fly balls, but inevitably some superstar slugger would swing for the fence and my prayers would go unanswered. The crack of the bat would jar me from thoughts of starring in one of my favorite TV shows or from admiring the second baseman’s curly blond hair. I’d look up to see a hard, round lump careening towards me while another one lodged in my throat.

As I stood there frozen, deer in headlights, hoping the ball would either curve to left field or fly over the fence, my teammates would start yelling at me to catch the ball. So I’d act as if I were tracking the ball’s trajectory, take a few steps forward, pretending I had every intention of getting under the ball, and then I’d gradually sneak back a half step or two, fearful of actually coming close enough to catch it. Then, I’d stick out my glove, hope for the best and close my eyes. As I heard the thud of the ball hit the grass, I’d think to myself; “Yes, I missed it!”

All the other boys were so into the game—running, catching, diving for the ball. Me, I tried to stay as far away from it as possible. When my time at bat came, I stood so far away from the plate I might as well have stayed in centerfield. But after a year of continued badgering from my coach, my teammates, my father and practically everyone else I knew, I finally moved in closer, nice and close, so I could hit the ball. The only problem, the ball hit me instead, right smack on the elbow. It hurt like hell and although I tried my best not cry, I couldn’t help it. (Tom Hanks would have been terribly disappointed in me.) Miraculously, I managed to escape with no broken bones and finally made it to first base only to discover that first base wasn’t all it’s cracked up to be. So bucking tradition and finally refusing to conform, I quit, thus saving myself and my father further humiliation.

By age 8, I was already a Little League dropout and I couldn’t have been happier. Now my afternoons were free to focus on my favorite activity—watching soap operas with my sisters.
Posted by Vincent James Arcuri at 10:49 PM