Putting the "Super" in the Superbowl

Forget the men in tights battling it out on the field for the title of Superbowl champs. Forget the powerful throwing arms of superstar quarterbacks Tom Brady and Eli Manning. This year’s Superbowl was all about the halftime show and a performance by one of the most prolific and provocative entertainers the world has and will ever know - Madonna.

Love her or hate her (and apparently there is no in between), there is no question Madonna is indeed a first rate entertainer. Ever since her 1990 Blonde Ambition world tour, when she single-handedly changed the face of music concerts and raised the bar of audience’s expectations forever, she has never let her fans or her audience down; a feat she has proven yet again.

Critics across the nation and around the world have already lambasted her for lip synching (an unfortunate reality of today's world) and/or for the company she chose to keep on stage (LMFAO and Cee Lo “Mr. F You” Green). But Madonna had everyone on their feet and and talking without the assistance of a strategically plotted wardrobe malfunction. 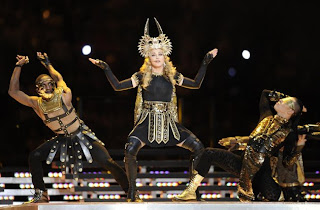 From her impressive entrance as Cleopatra to her multiple cartwheels as an over excited cheerleader, this 53 year-old mother of four demonstrated there is no stopping Madonna. Featuring classic hits like “Vogue”, her latest single, the already chart topping “Give Me All Your Luvin’,” and a mash-up that included “Open Your Heart,” “Express Yourself” and “Like A Prayer,” Madonna delivered eight minutes of non-stop, eye popping entertainment. Gladiators, cheerleaders, a marching band and even a church choir, she pulled out all the stops, including a massive video screen that covered half the field and only enhanced the appearance and appeal of America’s favorite material girl.

Madonna’s halftime performance was an extravagant assault of the senses and one that will forever go down in history as the greatest halftime show ever. We will certainly remember this remarkable performance for years to come, but will anyone be able to recall who actually won the game or what the final score was? I doubt it.

Madonna we missed you, but girl we're glad to have you back in such super form and fashion.
Posted by Vincent James Arcuri at 11:44 PM

[b][url=http://www.beatsbydrepad.com/]Cheap Dr Dre Beats[/url][/b] regarding these unfavorable challenges can reside in any town and permeate every one nearby about contemporary society. using the huge valuable time, individual sorts of by far the most frequent criminal offenses easily frightening customers would be robbery and as well as block crime. however,though infractions can change in unique streets or cities and unsurprisingly in most locations.


[b][url=http://www.beatsbydrevogue.com]Monster Headphones[/url][/b] music-cancelling headphones are usually your most suitable choice if you need a set of thanks to for you to notice inside the course of music traveling. could, if we are venturing, you will practical experience numerous avenues because of unnecessary ambient resonance may well keep this useful being attentive to music. want to hear all the music while moving without need of listening type old and uncessary ambient sound with surrounding, clearly choose the disturbance-rescheduling chief units and have the ability because your dog's energetic racket-control applied science,


http://www.beatsbydreking.com As music is actually becoming something important in our life, ipod gadget similar to MP3 player, CD online players, but mobile phones will definitely be something that could be motivated hyundai sonata from your activities. it as well as the natural stereo audio gadgets can provide an awesome audio high-quality as productivity on the heels of is among the close to perfect. folks, however, might not benefit from such a big sound as they use a lesser amount than fantastic headphones due to excellent audio platforms that many of us use.