Growing up I had plenty of friends, but my best friend of all was the television set. Ever since I can remember, I’ve been fascinated by that little box my parents referred to as the “boob tube”. It all just seemed so magical to me, the way these people came to life inside that set and inside our home. It was a world I desperately wanted to be a part of, one that seemed larger than life and so extraordinary.

Back in the late seventies when I was growing up, we only had three major networks, ABC, NBC, and CBS. Well, I was literally the walking TV Guide. I knew every show on every channel, every night of the week in every time slot. When my parents or sisters wanted to know what was on TV, I’d ramble off all their viewing options as if I were reciting my own name. It was quite a talent, and considering this was before the advent of the remote control; I saved them plenty of time from standing around turning the dial and adjusting the rabbit ears just to see what was on.

While most young boys my age spent endless hours watching “Starsky & Hutch”, “Chips” or “The Dukes of Hazard” my favorite TV shows were “I Love Lucy”, “Laverne & Shirley” and “Different Strokes.” I loved the comedies and I loved Gary Coleman, I wanted to be just like him! (Yes, at eight I dreamt of growing up to be a short black man.)

Honestly though, there was something about Gary Coleman (a.k.a. Arnold Jackson) that just resonated with me. I wanted to be him. I wanted to be the center of attention, the one who always made everyone laugh, who always had the funniest line, the one who was always trouble but never “got in” trouble. I wanted to be the kid who lived in a penthouse apartment and dropped water bombs off the balcony or stole cookies from the bottomless cookie jar, who hung with the housekeeper and who always had an exciting adventure or trick up his sleeve. Arnold Jackson was my peer, my colleague and my roll model.

Arnold always put a smile on my face and made me laugh. We got along splendidly and always had fun together and whenever he uttered that infamous phrase; “Whatchoo talkin’ bout?” I just loved it and I loved him! (Come on, admit it…you wanted to squeeze those cherubic cheeks of his as well!) 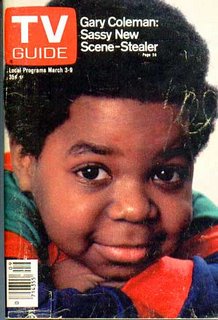 After seeing Gary on TV, I begged my mother to take me into Manhattan for auditions so I could become an actor just like Gary Coleman. I called information asking for a listing in Burbank, California (I knew that’s where NBC was located) under the name Coleman, Gary. I never got the number, but my father located an address at NBC and the letter writing began.

I wrote to Gary asking for an autographed photo, telling him I wanted to grow up to be just like him and asking for career advice. Each time I wrote, I’d receive the same standard black and white postcard with a note from Gary on the back. When I received the first one I was convinced it was for real, but as the others began to arrive, I realized it was just a form letter.

Each postcard was addressed “Dear Fan, ” Gary would thank me for my support and for watching his show and then signed it “Sincerely Yours, Gary Coleman.” I didn’t even care that the cards weren't original, personally signed cards. I was just thrilled to receive something from Gary, delighted in knowing that he received my letter and kindly asked his assistant to mail me a postcard, which I hung on my bedroom wall and admired daily. 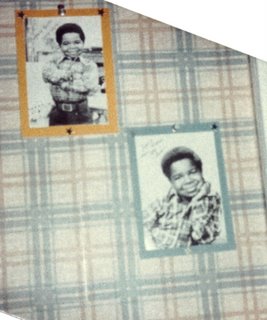 About six years ago during a commercial audition, the casting director explained the audition process, she was just going to ask a simple question. As she pulled four of us into the room, she lined us up in chairs, I was last in line. She started on the left side of the room and asked the first guy a question: “What’s your favorite band?” I thought about it and immediately had my own answer – REM. The second guy’s question was: “When was your first kiss?” I thought this is easy, the sixth grade, a girl named Michelle. The third guy’s question was: “What’s your favorite sport?” Again, I thought how easy – baseball, the New York Mets. Then my question came: “Who was your hero growing up?”

I was completely dumbfounded, thoroughly shocked and for once in my life rendered speechless. “My hero? What do you mean by hero? How old are we talking? My hero at five or my hero at ten?” I asked completely perplexed.

The casting director repeated the question once again and I still had no answer. The other three guys just sat there staring at me like I was an idiot with an expression on their faces that read; “Dude, you blew it.” Then she rephrased the question in an attempt to make it easier for me and inquired; “Whose poster was above your bed growing up?” Without hesitation, I erupted with my answer. "Gary Coleman!”

She looked at me in horror and mockingly said; “Whatchoo talkin’ bout Vincent?” I knew immediately my competition was right, I blew it. She thought I was pulling a fast one on her, but I assured her I wasn’t kidding. Growing up, I did have a big blue poster above my bed with the full-length image of Gary Coleman on it. The audition ended, and although I never booked the job, I walked out of there thinking at least I gave an honest and authentic answer, and at the very least they would remember me. After all, what other white boy from Queens would admit Gary Coleman was his childhood hero? 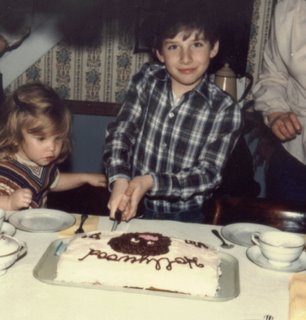 March 1980, my 9th birthday celebrated with a Gary Coleman cake!

Vincent... My uncle was Vincent Carmen Arcuri from Illinois. He worked to build houses from what I could remember and his wife was Connie... Are we cousins? Terri (Theresa Arcuri)