Inspiration Comes In Many Forms

In an attempt to kick start my writing, a friend recently emailed me an article on best-selling author David Sedaris. This wasn’t the first, and I’m sure it won’t be the last time Sedaris and his words offered some much needed inspiration.

I was first introduced to David Sedaris by my ex boyfriend, Eric. He was my first love and seemed to fulfill all my boyfriend requirements - blue eyes, a great smile, mid-west upbringing, creative, passionate, oh and let’s not forget - a cheater. (That last quality I was neither seeking nor aware of at the time.)

Anyway, on the ride back from Pismo Beach to Los Angeles, I guess my gift of gab became a bit much, as Eric suggested we listen to a book on tape.

“A book on tape?” I mockingly inquired. “What are we eighty years old?”

This was the most ridiculous suggestion I’d ever heard. I had never listened to a book on tape before. Talk about a snore fest. What were we supposed to do, drive in complete silence and just listen to a book?

Eric said it was his favorite author, David Sedaris, whom he discovered on NPR. Again, I asked with a hint of annoyance, “NPR?” When Eric informed me it stood for National Public Radio, I rolled my eyes thinking dear God; I’d fallen in love with my father – a man who liked boring talk radio. How the hell did that happen? 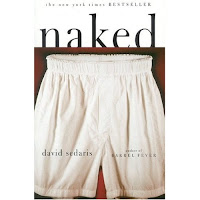 Immediately I began dreading the two hour drive, although the title of the book did at least pique my interest – Naked. As Sedaris’s monotone yet infections voice engulfed the car and our ears, I instantly became captivated. Within mere minutes, I was laughing out loud, taking pure pleasure in listening to his antics and true tales. By the end of the first chapter, I realized, this is what I wanted to do. I wanted to tell stories, to make people laugh; I wanted to be a famous storyteller.

That was 1997. Ten years later, I finally found the courage to enroll in my first writing class. During the first class, the instructor offered numerous examples of personal essay, which thanks to Sedaris, is now one of the most popular forms of literature. As class was ending, the instructor asked who would like to present their work during the next class. Determined to get my money’s worth, I immediately rasied my hand. Besides, I already had a few stories written, and figured I was way ahead of everyone else.

The following week, there were three of us prepared to present; one female student, another male student and myself. Being perfect gentlemen, we allowed the lady to go first. Well, not only was her work eloquently read, but also impeccably written. She used words I’d never even heard before or understood. Suddenly, I had flashbacks to all those SAT words I wished I had learned. Her essay was so good; I swore this bitch tore it directly from the pages of the New Yorker.

As sweat began dripping down my spine, I gave the other guy a glance that said, “No way in hell am I following her.” He took the hint and presented his essay next - a short story about the pressures of living up to the standards set by his alma mater, Harvard University. Now, I was even more distraught. First a New Yorker linguist, followed by an Ivy League graduate, followed by my dumb ass.

As it came time to present my essay, I offered a disclaimer to all not to judge my third grade writing abilities, and then began reading my essay - a piece about my jaunt to the batting cages as an adult and encountering an overly intimidating team of Little Leaguers. The more I read, the more the other students laughed. When I finished, I looked up to find a room full of smiling faces and promptly felt relieved. It may not have been the best written piece, but it certainly received the best response.

Eight weeks later, when the course ended, the teacher pulled me aside and gave me some life altering advice. She told me to stop worrying about whether or not my writing was smart enough and start submitting my work. With that advice in mind, I sold my first essay a few months later and was officially a published writer.

Today, I still struggle with what to put on the page, and although I am years away (hopefully) from the stature of David Sedaris, I would not be writing if it weren’t for him, the advice of my writing teacher, and that cheating ex of mine who changed my life with a book on tape.
Posted by Vincent James Arcuri at 6:17 PM