As I grew older, my interest in Gary Coleman dissipated (the attraction wore off) and my attention turned toward the seductive and sultry world of soap operas.

With three older sisters, it was difficult not to become influenced by or involved in their interests (see below…Barbie dolls, batons and basketball cheers!) Anyway, when I was in the first grade, my sister Christine decided one day to pay a visit to Port Charles and the entire family soon followed, quickly becoming addicted to “General Hospital.” I was captivated day one and from that point on, I could not cope without my soap. 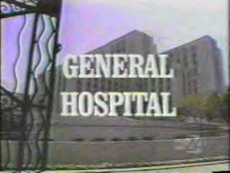 It was the late 70’s; Laura Webber had recently been accused of accidentally killing her boyfriend, but in an attempt to protect her daughter, Dr. Leslie Webber took the blame and went to jail for the crime. While Leslie sat in the slammer, Laura fell in love with Scotty Baldwin, who was slammin! (At least that was my point of view.)

Scotty was an all-American blonde haired, blue-eyed boy from a good family, his mother Gail was a doctor and his father Lee was an attorney. Scotty had just passed the bar exam himself when he asked Laura to marry him one fateful Christmas Eve as they decorated the Webber’s Christmas tree. Scotty placed the star atop the tree and a ring on Laura’s finger. It was incredibly romantic as Laura began shedding tears of joy expressing how she had always dreamed of this moment; decorating the tree with the man she loved and who she would spend the rest of her life with.

However, true to soap opera form, their love would inevitably die much like that once fresh Christmas tree they decorated that afternoon. Shortly after they were married, bad-boy Luke Spencer came to town, opened a disco, hired Laura to work for him and then one nefarious night decided to rape her right there on the dance floor. They soon fell madly in love (but of course), running off together to escape Frank Smith, the local mob boss, who they would eventually take down, only to triumphantly return to Port Charles for the wedding of the century (30 million viewers watched that afternoon in November of 1981.) Luke and Laura would later save the town of Port Charles from the evil Cassadine family and the Ice Princess, which threatened to freeze the entire city. Talk about excitement, nothing like that ever happened in Queens!

By the time I was in the fourth grade, I was a soap fanatic with my “General Hospital” t-shirt, notebook and scrapbook, which tracked every single character and cast member. I dreamed of one day being on “General Hospital” arriving in Port Charles as a distant relative of the wealthy Quartermaine family. Then I discovered the lavish lives of the Carrington clan on “Dynasty” and that became my newest obsession and escape from the common, narrow-mind 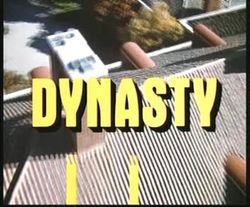 “Dynasty” was pure decadence and debauchery and I loved every minute of it! The Carrington’s lives were full of murder and mayhem, catfights and caviar, and hookers and homosexuals. The later of which peeked my interest the most.

Steven Carrington was the first gay man I ever knew. He was sensitive yet seductive with his blonde hair and blue eyes, tall yet timid, conflicted yet courageous, wealthy and hot as hell. HELLO! Forget Arnold Jackson, I wanted to be just like Steven Carrington; wealthy, blonde, beautiful and gay

…or at least find a boyfriend just like him.

Steven’s life, much like my own, was met with difficulty due to the fact that he was the only son, gay, and the heir to the “Dynasty” fortune. (Okay, so maybe there’s no fortune for me to inherit, but can’t a boy dream?)

Steven was the outcast of the family wanting little to do with the family oil business while his father, Blake, wanted nothing to do with his homosexual ways. Their relationship was strained to say the least, but became much worse when Blake accidentally killed Steven’s lover, Ted Dinard. After discovering Ted in Steven's bedroom, Blake pushed him away from his son, sending him crashing into the fireplace and smashing his head on the base. Poor Steven, could you imagine?

Steven would later succumb to his father’s demands and marry his step-mother Krystle’s low-class, common, money hungry whore of niece Sammy Jo (expertly portrayed by Heather Locklear), then ended up with crazy Claudia when Sammy Jo left town to become and actress, before finally settling down with men again and dating Luke Fuller, (actor Billy Campbell) who was even dreamer than Steven. However, much like Ted, Luke met an untimely demise as well at the wedding of Steven’s sister Amanda during the now infamous Moldavian massacre.

Steven’s life may have looked glamorous from the outside, but it was pure drama on the inside. No thanks.

Two years ago, I actually visited Filoli, the mansion used in the opening credits of “Dynasty” and where they shot the first three episodes, in northern California with my ex-boyfriend. (Who come to think of it, was somewhat like Steven.) As we roamed the halls and grounds of Filoli, it was a dream come true. I ran up and down the staircase giving my best Carrington impersonation and posed for photos in the ballroom where Blake married Krystle. It was amazing. I felt like a kid in a candy store, reliving a portion of my childhood and all those fantasies I had of one day growing up to become rich and famous like a Carringtion. Well, I may never be a Carrington, but I think I still have plenty of time to become rich and famous.
Posted by Vincent James Arcuri at 3:26 PM

Thanks for one's marvelous posting! I truly enjoyed reading it, you're a great author.
I will make certain to bookmark your blog and will eventually come back from now
on. I want to encourage continue your great job, have a nice weekend!

Every weekend i used to pay a visit this web site, as i want enjoyment,
for the reason that this this web site conations actually pleasant
funny information too.

I need to to thank you for this wonderful read!! I definitely enjoyed every bit of it.
I have you bookmarked to check out new things you post…

For newest information you have to pay a visit internet and on the web I found this site as a most
excellent site for most up-to-date updates.

Thank you for the good writeup. It in fact was a amusement account it.
Look advanced to more added agreeable from you! By the way, how can we communicate?

Greetings! I've been following your blog for a while now and finally got the courage to go ahead and give you a shout out from Lubbock Tx! Just wanted to say keep up the great work!

I am now not certain where you're getting your info, but good topic. I needs to spend a while finding out much more or understanding more. Thanks for excellent information I was on the lookout for this information for my mission.

Excellent post. I was checking continuously this blog and I'm inspired! Very useful info specially the remaining section :) I care for such information a lot. I used to be seeking this certain info for a very long time. Thank you and best of luck.

What host are you using? Can I am getting your affiliate link for your host?

If you are going for best contents like me, simply visit this web site daily since it presents quality contents,
thanks

bookmarked!!, I love your web site!

Hello, I enjoy reading all of your article post.
I wanted to write a little comment to support you.


Feel free to surf to my website :: daytime tv

I'm curious to find out what blog platform you happen to be utilizing? I'm having
some minor security issues with my latest site
and I'd like to find something more secure. Do you have any solutions?